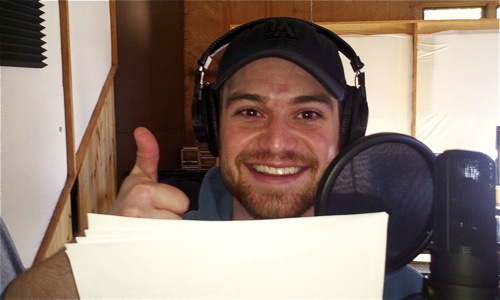 * Cason Murphy did a great job on his voice over work.

Andrew and I spent most of last week at Matt’s as Dead Votes actors congo-lined through the studio to record their ADR and voice over bits. Judy Stahl had the toughest job – lots of ADR for her – which she handled with patience and persistence. I was also thrilled that we got exactly zero flack for asking folks to give up a few hours (or more, for Judy) during the hectic pre-holiday dash to come and talk, growl, and cheer into the mic. We are so lucky to have such great folks to work with!

But the coolest and most bizarre thing was watching the hubster direct. Who would have thought phrases like “More mustache!” and “Try hipster HAL (from 2001 Space Odyssey)” would be so damn effective? I wouldn’t have, but I guess that’s why Andrew is the director and I’m the producer. Kevin Goss (Blaine Walpole) changed the way he held his mouth after the “more mustache” direction and gave us exactly what we were looking for. Cason Murphy also managed to pull off not only a “Hipster HAL,” but also a “carefree Hipster HAL” voice.

As expected, there was a lot of laughter in the studio. I have no idea how other folks work on movies since this is our first, but I don’t think I’d like working on a movie where there wasn’t lots of laughter and silliness. I mean, I understand that there are serious movies that require a bit more gravity. Really, I get it. But I have to say that if I’m going to commit all the time and effort it takes to see a project through, it had damn well better be fun. So I will ALWAYS say yes to laughter on set and in studio. Always, always, always.

Until next time…viva los zombies!

We’re still running flat out to get a final edit ready to hand off to Matt Jackson next week so he can get started on the sound track for Dead Votes Society. After looking at all the footage, we pretty much decided we needed to ADR (Automated Dialogue Replacement) the Press Conference scene we shot at the Courthouse Square. Nick Stecki is super talented, but there are so many external noises (damn you, motorcycles! and dogs! and car alarms! and wandering saxophone players! and yes, even a horse!) that it will sound best to ADR all of Serena’s (Judy Stahl) and Blaine’s (Kevin Goss) lines.

It’s a whole new layer of post-production that the average movie goer doesn’t even think about, but we’re actually kind of excited to learn how to do it. Besides, without ADR the entire movie would be less awesome. And we’re committed to making Dead Votes as awesome as possible!

For those who wanna see how ADR is done, here is a short “Behind the Scenes” video of the folks behind ‘The Navigator” doing some ADR for their movie.

This was the first time Angie had seen my rough cut of the short. As you may remember, she’s doing her own cut, so we can compare and come up with a version that uses the best from both of our approaches. And doesn’t lead to fist fights in the editing bay.

It was also the first time Matt had seen the rough cut. In fact, its the first time the three of us have worked together since the days of Coyote Radio Theater on KJZA. We’d had a great time doing that, we respect the man and knew he worked in a simular comedic vein to Christian, Angie and I.

Earlier in the process, Matt and I had talked about how we’d like to approach the project. We decided he would write and create the music, and oversee the post-production sound at his studio. Premiere Pro 6 and Pro Tools 9 HD would be the software of choice.

First, we watched the 10:40 rough cut just for fun and to see when the laughs were coming in at this point. Thankfully, there were some. (Hey, after all this editing, its difficult sometimes to remember where it is funny.)

Then, we watched it a second time and took notes. We agreed its easier to adjust the length of the music, so Matt is going to rough out the music cues while we still are futzing around with the editing. We came up with some musical ideas for Matt to explore.

We talked about how to solve the unwanted background sounds on the Square (more on that later).

I love working with talented people. More importantly, people who I enjoy hanging with, just as much as I respect their work. Feeling a great 2nd wind coming on!