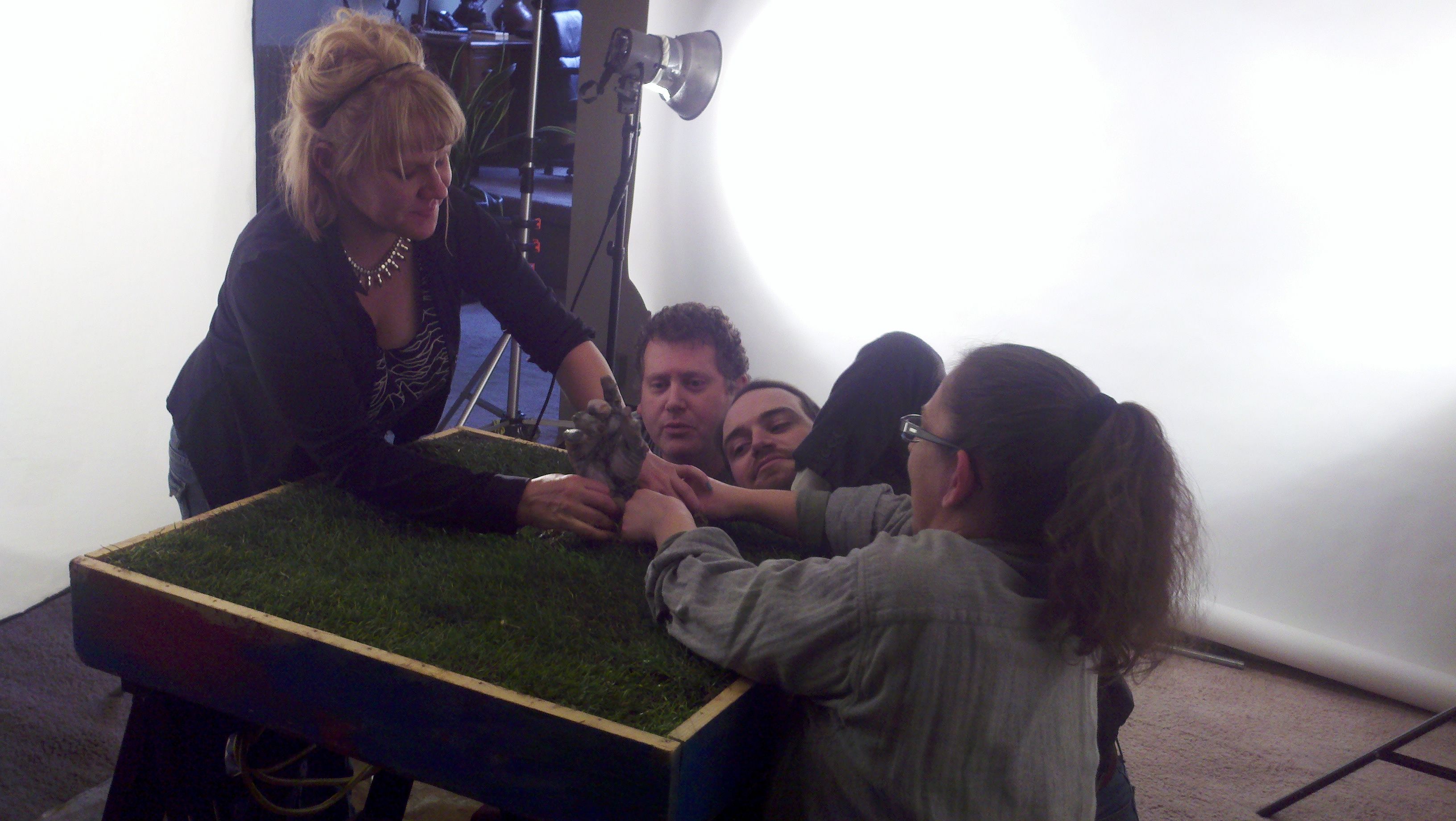 Years ago, back when Angie, Christian Smith and I were part of Coyote Radio Theater, we scored this Big Gig – playing the Orpheum Theatre in Flagstaff. We knew we needed a great poster for this gig.

And for that, we needed some very good photos. There weren’t that many great photographers in Prescott back then.

He was this fantastic photographer who did the big league stuff – swanky shoots for catalogues, bands, etc. His studio is on the top floor of the old Masonic Temple – the ceremonial room, in fact, with thick carpet, richly ornamented ceiling, scads of cutting edge equipment, design forward furnishings, etc. I mean, if there ever was a Bond Villain who was a photographer for Paris Vogue, his lair would look a lot like this.

So, out of our league. But, it never hurts to ask. So, we did. And he said yes. We had a great shoot with the various wonderful oddball voice actors who were going to bring these radio theatre characters to life. Chris really took in that odd energy and found ways to get it in the photo. Our performers really opened up to the camera and we got some of the best photos we ever had of the group.

Here it is, years later, we’re making our first Crest Top movie, “The Dead Votes Society,” a satire about politics in Arizona, adapted by Angie, Christian and I from the original radio sketch.

Angie, as these things usually happen, HAD AN IDEA. “What if on the movie poster we had this grave and the hand of a zombie is coming up out of the grave and its making that “V for Victory” sign with its zombie fingers and we superimpose the title of the movie, “Dead Votes Society” with the V in Votes being the zombie fingers making the V for Victory sign?

Once again, we needed a really excellent photographer – since this poster will be seen at film festivals all over this great land of ours. By great good fortune, Chris Marchetti contacted us about the same time and offered his help on this project. Angie is excitedly telling our good friend, graphic designer Tres Ikner about our luck working with Chris Marchetti again. He says, “I love that image. Who’s doing your poster design to go along with that image?” Angie shrugs. Tres taps his own chest and nods knowingly. Holy cats, we know the coolest people. 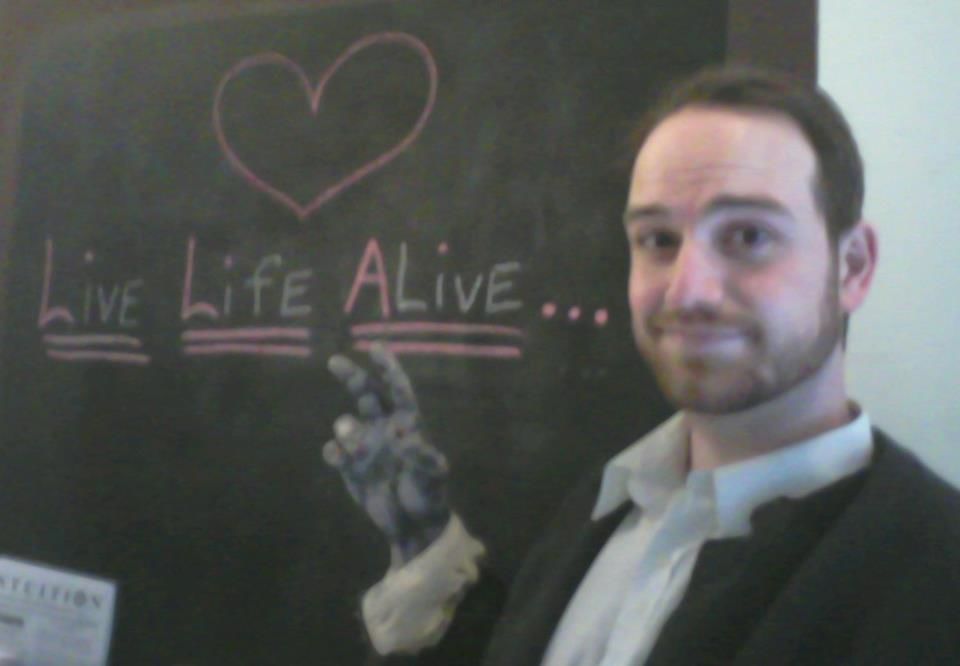 So, we leap into action. As producer, Angie recruits one of our zombie actors, the very expressive Cason Murphy, to be our Zombie Hand Model. 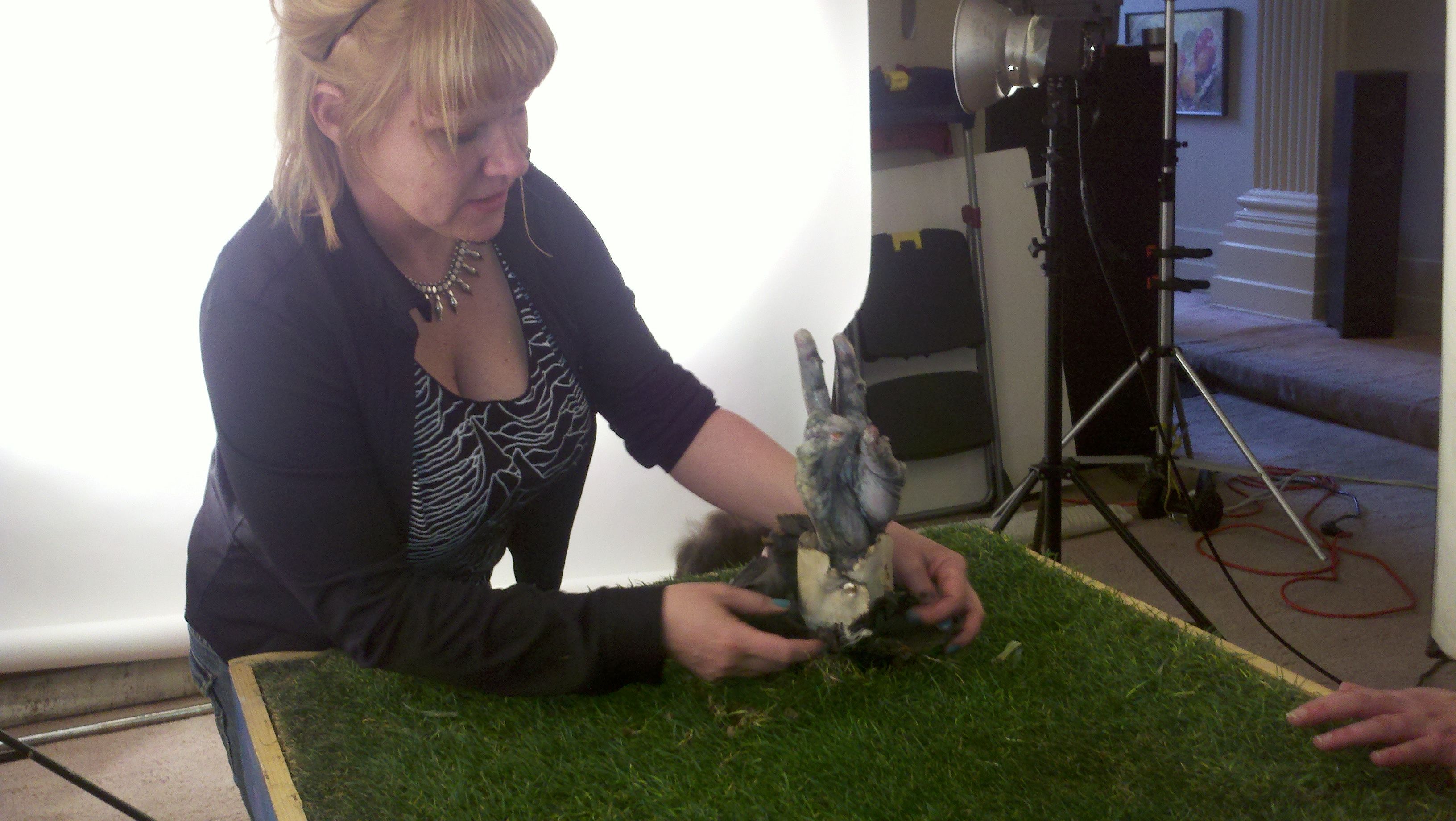 Production Designer Penelope Davis develops a two by two shallow box that can have sod laid across the top, a slit made in the grass and a tube run up at an angle for Cason to extend his hand up through the sod. Then, Penelope puts together a zombie distressed fashion shirt and jacket sleeve, which, in combination with her application of the zombie make-up designed by Ridge Gallagher, make for a hand that looks like its coming back from the grave with something to say.

As director, I managed to find damn near the last piece of sod in Arizona. Who knew they stopped making it in winter? The folks at Evergreen Turf in Chandler, AZ were incredibly helpful with this bizarre request.

It all came together on Saturday, in that fantastical loft at the top of the Masonic Temple. Once again, it was a pleasure to watch Chris Marchetti work – his intuition with the shot is only matched by his patience as we figured out how to get an image that was at once easy to read, funny and maybe a little profound in its own silly way. 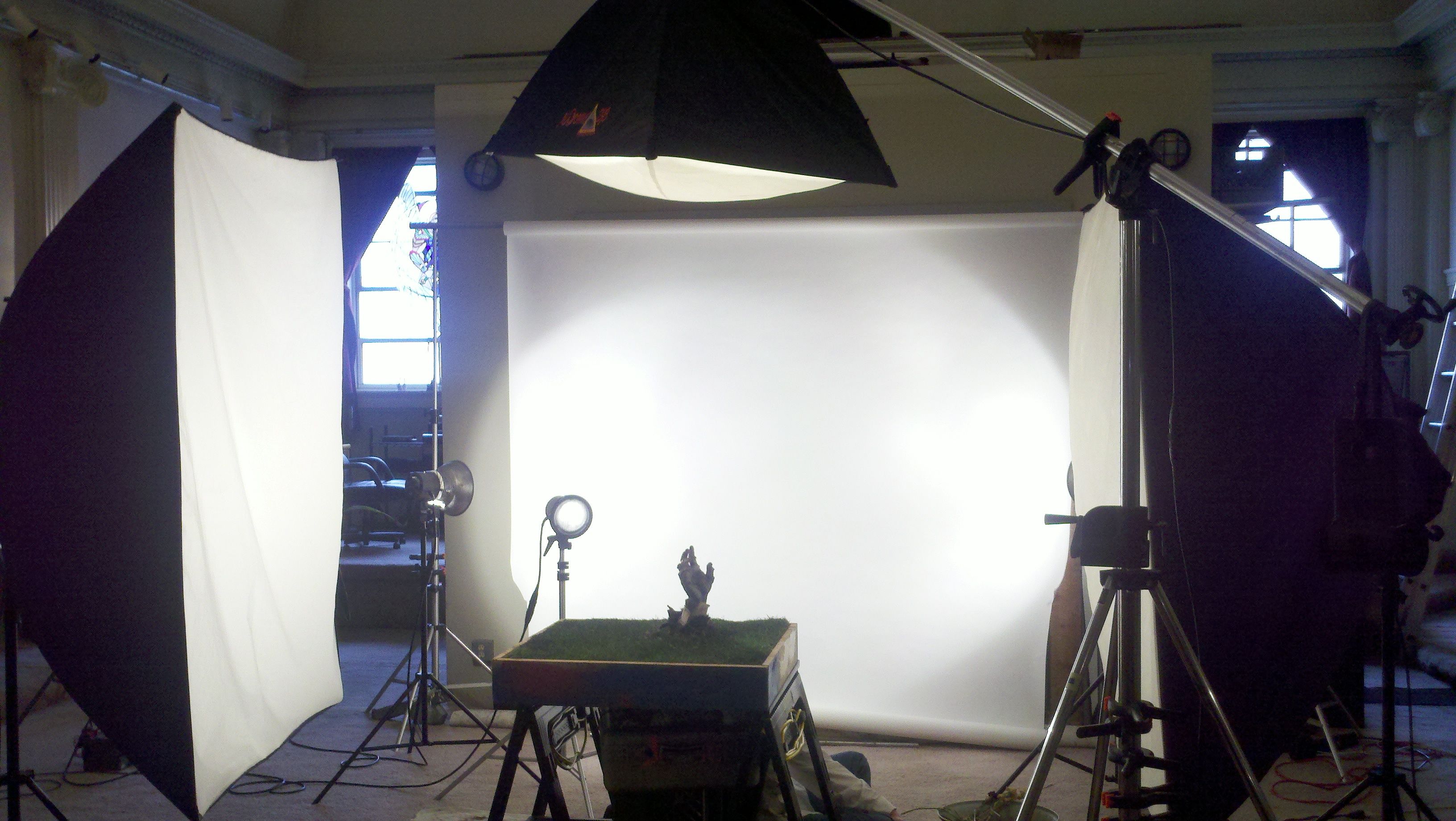 By the end of the shoot, Angie was standing next to Chris and shouting suggestions to the unseen Cason under the sod box.

By the time we got to “Do a Sexy V!” we knew we had it. Can’t wait to get the images to Tres for the movie poster.

What a fantastic ride we are on! 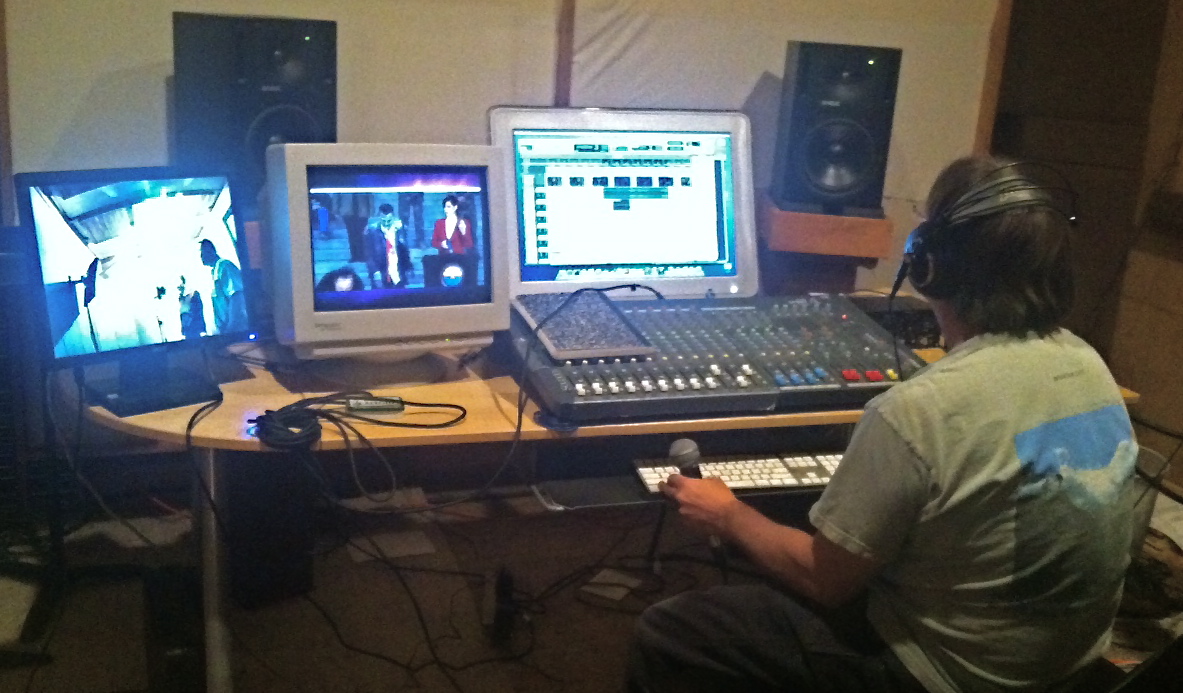 Angie here. I flipped out a little when I realized we hadn’t done a blog post since December – DECEMBER!!! But the reality is that between post-production, the holidays and the general winter urge to hole up inside the house until spring, it’s no surprise.

Regardless, here’s the latest scoop: Matt Jackson is pretty much done with the music for Dead Votes. The music for the opening credits is AWESOME (as Matt said, “Nothing says ‘zombies’ like bassoons…and cows”). And the uber-pompous French horns in the theme for the “Hot Coffee!” news show is equally fantastic. Seriously, is there a more pompous sounding instrument than a French horn?!

Meanwhile, Chad Castigliano is busy working on the graphics and AfterEffects for the movie. We’re heading over to see what he’s done and do some troubleshooting later tonight. ‘Cause there are always challenges, right? Nick Stecki is kicking off the sound mixing/foley/music SFX. I can’t wait to hear what he does with that!

And while the guys are tackling those aspects of post, I’m busy learning color correction and gathering all the goodies for the website. Andrew and Christian are busy working on the trailer script and the script for the upcoming feature.

More news on Thursday – swear! But in the meantime…Viva los zombies!