A Brief History of the Zombie Apocalypse 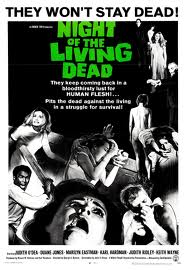 A new series in which we take a look back at some of the most significant moments in the history of the enduring Zombie genre.

Chapter One: Night of the Living Dead.

The modern zombie genre can trace its big bang moment to one film; 1968’s apocalyptic indie masterpiece, Night of the Living Dead. There are older examples of on-screen zombies (take the 1932 Bela Lugosi flick White Zombie or producer Val Lewton’s I Walked with a Zombie in 1943,) but those were “voodoo”-style zombies,  created by witch doctors to menace white people on Haitian plantations. All the elements of the modern zombie- walking corpses that crave human flesh and eventually overwhelm society- were invented from thin air by writer/ director George Romero and his co-screenwriter John Russo. (Romero does credit Richard Matheson’s classic novel I am Legend for inspiration, but technically that was about a vampire plague.)

Night of the Living Dead not only laid down the bedrock elements of zombie lore (the slow-moving menace, the cannibalistic hunger, the infectious bites, the necessity of a headshot kill,) the film also set the template for the social commentary that has always been a hallmark of the genre. Zombies are a convenient stand-in for whatever anxieties are floating around in the zeitgeist at any given time. (In 1968, it was likely social unrest and Vietnam jitters.) Night also established the basic zombie film tenet that “we are the real monsters.” Human survivors are inevitably undone by petty power struggles within their little fortresses, no matter how well buttressed. The zombie menace is never as truly dangerous as Other People.

But Night’s most potent bit of social comment was, if its creators are to be believed, entirely accidental. Though they claim to have cast Duane Jones, an African-American man, as their lead only because he gave the best audition, it’s hard to imagine they were unaware of the resonance and depth this crucial casting decision would give their film. 1968 audiences would have been completely unprepared to see a black man take charge over the otherwise white survivors- and slapping the hysterical white woman must have been an especial shock. Even more remarkably, the character’s race is never once mentioned or even alluded to, making the commentary implicit rather than explicit. The audacious and unprecedented presentation of a black hero pays off in spades with the bleak, bleak irony of the film’s ending. Our protagonist survives the night of horrors only to be mistaken for a zombie by a redneck sheriff and his roving posse, who shoot him in the head and unceremoniously burn his corpse as the end credits roll.

(As forward-thinking as the film was racially, it definitely springs from a pre-feminist era. The female characters are all Mad Men­-era archetypes. The Hysteric. The Nagging Wife. The Ditzy Girlfriend.)

Stylistically, the film turns what could have been drawbacks into mood-setting assets. The amateurism of the actors and the low-budget production values lend the material an unpolished, naturalistic documentary feel. Restricting almost all the action to one set saves a lot of money, but also ramps up the claustrophobia. The black-and-white cinematography and the brilliant “They’re coming to get you, Barbara” set-up primes the audience for a 1950’s drive-in throwback, before reeling them into pure 70’s nihilism and (shocking at the time, almost quaint today) violence and gore.

Night of the Living Dead’s seismic legacy has been dampened somewhat due to a very unfortunate clerical error. The original title, Night of the Flesh Eaters, was changed at the last minute, but the distributors failed to include the copyright notice on the new title card. According to 1960’s copyright law, this meant that the film slipped into the public domain. Legally, anyone can dub off cheap copies and sell them in the dollar bin at Walgreens and the film’s creators don’t see a dime. Lack of copyright also led to a long series of rip-offs. Not only are there numerous sequels and remakes, there are sequels to the remakes and remakes of the sequels. The film has been re-dubbed, colorized (making the zombies green for some reason,) converted to 3-D and even animated over (a somewhat interesting experiment, actually.) The most egregious tarnish to the original reportedly came from co-screenwriter John Russo himself, who put out a “30th Anniversary Edition” in 1999 that added new scenes and a new music score. (I haven’t seen this version myself, but it is universally derided.)

Despite 45 years of escalating zombie violence, the original film retains an undeniable power and still contains the ability to shock. (Gotta love the garden trowel matricide in the basement.) It’s available for streaming all over the internet (I have it playing on Hulu in another window as I write this.) Anyone with even a passing interest in this genre should definitely take the trip and see where it all began.

Click the link for the first zombie attack in movie history: